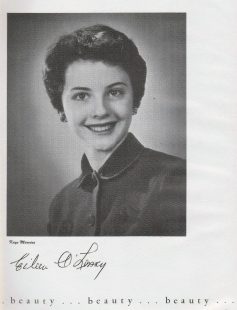 at 36 with my family

I finally figured out that all the people I ever was from infancy on still live inside me. It makes for an interesting group most days. And if I don’t like how I feel today, I just return and watch the world when I was having a better time. Young people actually seem impoverished, because they haven’t got a clue about the riches we old guys carry around within us. I wouldn’t trade, because we can go back and be their age inside our memories, but they can’t come forward and enjoy the pleasures of a party without having to drive miles, spend hundreds or pay later with a hangover.
We do know more dead people and we have seen more tragedies up close and personal, so sometimes we hover protectively over our grandchildren. But we can look back at the past and our track record helps us trust that grace will continue to get us through even the hard things the future may bring.
As bad as our world seems in 2015, anyone having experienced life even in America for almost eighty years has witnessed a lot of rough history. Though we now know more about the evil in the world than we once did, the evil was always there. I find when I focus on the evils we haven’t overcome, I fear for coming generations. But when I look back even just on the changes in the world that I have experienced personally, I become more hopeful for the future.
Is having an armed presence in your school any more terrifying than living in homes with blackout curtains for fear of enemy bombers in the nineteen forties or huddling in a school hall during practice warnings of atomic attacks in the fifties. Is the number of families in this generation with members lost fighting in foreign countries anywhere close to the number in the second world war? Is fear born of lack of information as severe now as it was when we huddled around a radio to listen to news of Pearl Harbor or the beaches of Normandy. Children still die or are crippled from disease even in first world countries, but nothing like the numbers in the years before the polio vaccine. Are the numbers of African Americans isolated in ghettos, killed by police, harmed and held back by prejudice anywhere near the numbers in the fifties? Are all the top jobs in the corporate world still held by men? Are people still dying from aids at an alarming rate even in the first world? No matter how horrifying terrorists are today, have they managed inhumanity on the scale of Hitler or Stalin or Pol Pot and the Khmer Rouge, or even Harry Truman at Nagasaki?   The answer to all of these is no.
Yes, there are new diseases, new dangers, new stresses and new groups struggling for equality. It is obviously not heaven on earth, but humanity is a work in progress. Our track record gives us reasonable hope that we will find ways to overcome more and more of these problems in each era.
Age, if we look at even our own life span’s historical picture, can give us a perspective.

Mother of five, grandmother of nine, great-grandmother of five. 1955 -1959 Rice University in Houston, TX. Taught primary grades; Was Associate Post Director of Religious Education at Ft. Campbell, KY; Consultant on the Myers/Briggs Type Indicator, Was married for 60 years to an Architect in Middle Tennessee.
View all posts by Eileen »